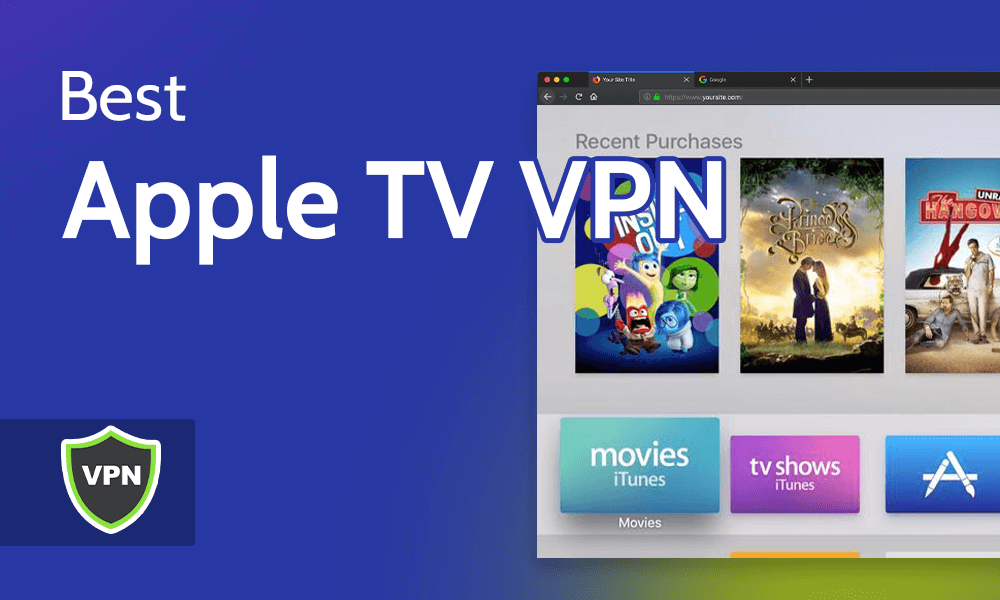 Apple TV has a great selection of shows and movies to enjoy. But like all streaming sites, the content varies by region. And while you can enjoy your favorite shows, apps, and music at home, you won’t be able to access them from abroad.

But the great Apple TV VPN bypasses all the geo-blocking and censorship that restricts your access to specific content on Apple TV, iTunes, and the App Store. And you can get one to help you get the most out of Apple TV wherever you are.

Remember, Apple TV has neither a built-in VPN nor the ability to download through your TV’s App Store. Fortunately, there are workarounds, such as router installation and smart DNS configuration.

First, you need to get a reliable VPN that works with Apple TV. Keep in mind that there are at least a dozen different VPNs out there, and choosing a good one can be a challenge. So we’ve listed the best Apple TV VPNs for you!

NordVPN has a proven track record on a wide range of platforms including Netflix, Hulu, HBO and Go, Sling TV, Amazon Prime Video and BBC iPlayer. Simply consult the online knowledge base to learn which servers are available for which channels. You’ll get up to six simultaneous streamers in one subscription. Connections can be made to more than 50 countries, and each server is protected by strong 256-bit encryption.

NordVPN has an encrypted DNS proxy tool called SmartDNS that helps unlock geo-locked content. This can be used separately from the main VPN service, but requires the use of a VPN application, which means it cannot be configured on the router itself. Instead, you still need to complete the full VPN setup on the router.

NordVPN sells pre-flashed DD-WRT routers that come pre-configured with all the servers you need to unlock content on Apple TV. The NordVPN Knowledge Base also has some detailed tutorials on how to manually set up existing VPN-compatible routers.

CyberGhost is a great option for Apple TV. Get fast VPN access to U.S. Netflix, iPlayer, and other geo-restricted streams at a low cost.

CyberGhost is a VPN provider based in Romania, which is a great location in terms of privacy. The VPN has servers in 90 countries worldwide, so you can spoof your location to almost anywhere to unlock regional content globally. With CyberGhost, you get apps for all platforms, which means you can use any computer, laptop or router to set it up to connect to Apple TV.

Usually, VPNs only unblock specific websites and at least one major streaming service blocks their IP address. We’ve run into this problem with Netflix US when using many other VPN providers. However, we always found that CyberGhost seemed to work with whatever content we were trying to unblock. We tested it on Apple TV by sharing our VPN connection with Apple TV on our Mac, and it was relatively easy to set up. One of our team also recently suggested to their friend that he install one on his router to use with Apple TV, and they found it very easy because CyberGhost has page after page of instructions for specific router types.

In addition, CyberGhost VPN offers excellent privacy protection with its zero-logging policy, OpenVPN encryption, termination switch and DNS leak protection, ensuring that you can enjoy this VPN for entertainment and gain privacy and security at home and on public WiFi. This VPN can be installed and used on up to 7 devices at once, and thanks to its money-back guarantee, you can test it risk-free for up to 45 days. In addition, the CyberGhost customer service team is available 24/7 via live chat and can assist you in English, German, French, and Romanian.

If you are looking for a VPN that is affordable and competes very well with premium competitors, Surfshark is your answer. Considering Surfshark’s extremely competitive price, its speed is impressive to say the least. In particular, the US servers performed well in our tests. This is useful for people who like to use Apple TV to access US streaming services like Netflix and Hulu.

Surfshark doesn’t have as many servers as ExpressVPN and NordVPN, but it still offers a lot of options in terms of location. This makes Surfshark a great VPN for unlocking purposes. Surfshark also offers a 30-day money-back guarantee that lets you try it out before you go for a long-term subscription.

Starting with ExpressVPN, I think it’s easily the best choice if you want to stream across a large number of platforms. After plugging in your Apple TV and connecting to ExpressVPN, you’ll quickly get used to its 3,000 servers in 94 countries around the world.

With such a large server base, ExpressVPN’s unlocking capabilities are top notch. It works with Netflix and in my testing it successfully unlocked about 15 libraries, which is impressive. In addition, the provider can unlock BBC iPlayer, Disney+ and HBO MAX abroad.

Another important thing is its Lightway VPN protocol. This protocol not only provides bank-level security, it also dramatically increases the speed of ExpressVPN.

With it, this is the fastest provider you can get for 4K streaming on the platforms that allow it. Also, if you’re interested in more benefits of ExpressVPN, you’ll be happy to hear about its zero-logging policy and P2P-friendly servers for anonymous torrenting.

In addition to this device, ExpressVPN also works on Windows, iOS, macOS, Linux and Android, and supports Smart TV, Fire TV Stick and many other platforms. In addition, it offers 5 simultaneous connections in a single subscription, allowing you to protect multiple devices at the same time.

In addition to connecting it to your router for use with Apple TV, the provider also features MediaStreamer – a curious name for SmartDNS. If you’re interested, it’s perfect for bypassing geo-restrictions and making the entire Apple TV VPN setup easier.

Finally, ExpressVPN has an annual plan that comes with a 49% discount and a 3-month free trial. This comes with a 30-day money-back guarantee along with all other plans, so you can use ExpressVPN risk-free for 30 days and request a refund if you don’t like it. But that’s not going to happen, honestly.

What’s most important as an Apple TV VPN is the VPN’s ability to unlock streaming services, and PIA is very reliable here. Whether it’s US Netflix, Amazon Prime Video, BBC iPlayer, or any other service, you can watch it anywhere, anytime.

With the dedicated Smart DNS service, getting PIA up and running on your Apple TV device is simple. All you need to do is search the General Support section and go from there. Or, of course, like all the other options we’ve listed, you can install PIA on your router, or set up a virtual router.

While some other providers are a bit faster, the average speed of 320Mbps PIA is still not too slow, and for the price, it’s well worth a try.